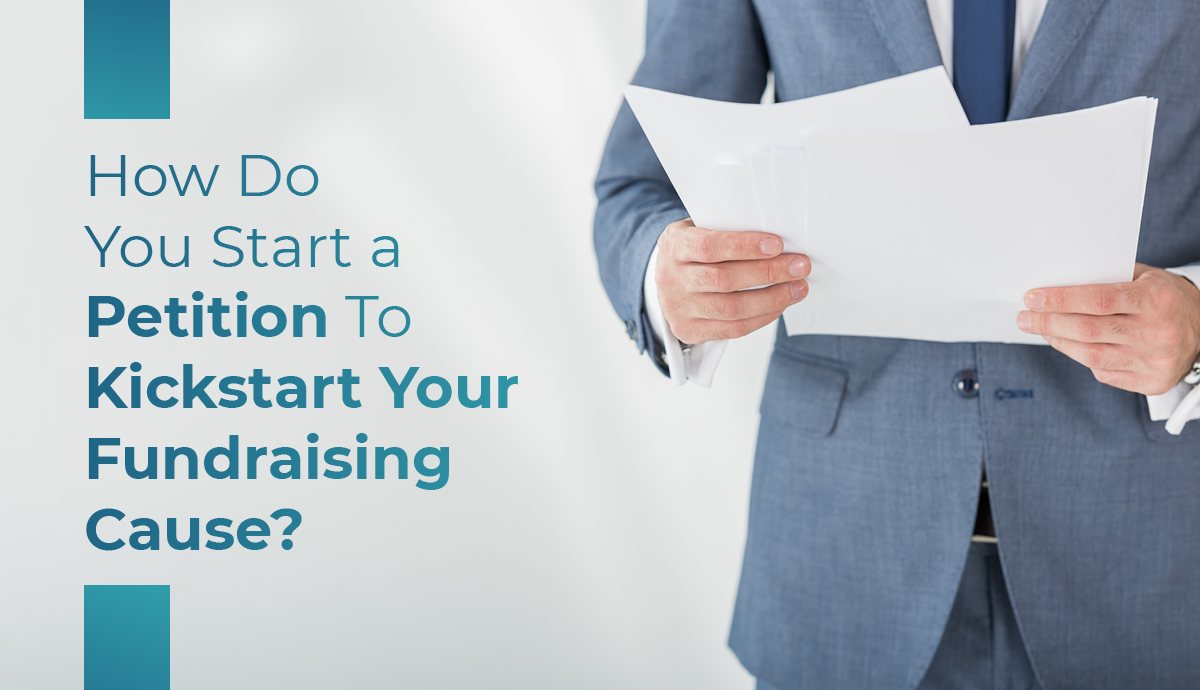 Sometimes, you can’t make it on your own. You can have all of the passion and guts in the world, but there are some things that you just can’t do alone. Fundraising is a great example of this. You can try to get the ball rolling by donating to it yourself but without support and input from others, your cause will miss out on a lot of potential benefits.

But how do you get others interested? You need to make a splash to get some attention. The stunts that people are willing to try are many and varied. Today we’re talking about one of the less spectacular methods, but a supremely effective one nonetheless. We’re talking about petitions. What are they, and how do you go about starting one to boost your fundraising project?

What is a Petition?

Petitions are a list of names, often accompanied by some basic contact details. The names belong to people who have agreed to indicate their support for a cause. The cause tends usually to be related to a political, community or ethical cause. They’re more likely to be concerning environmental and political matters than spreading the word about more technical matters like retail industry IT solutions, for instance.

A petition can be as simple as a sheet of A4, a web page spread via social media, or a mix of both.

Greenpeace’s campaigns are a great example of this kind of online petition format. Looking at the petition web page, you can immediately see all of the relevant details of the campaign, as well as a short contact form to fill in and add your support to the project.

Are they effective? In some contexts, they can lead to real action.

For instance, in the UK, if you get 10,000 names on a petition on the government’s official petition platform, they are legally compelled to make some kind of response. If the petition gets 100,000 names, it will trigger a debate in the House of Commons – in other words, the government is obliged to discuss the issue in the national legislature.

Aside from this, petitions can be excellent awareness-raisers. People who sign up are more likely to then go on to learn more about the issue. Or, a petition might help put extra pressure on a government or a corporation if they feel that a significant number of people find them and their behavior unacceptable.

Finally, and most pertinently here, it can help to grow a campaign’s funds. The Greenpeace petition displayed above prompts for a donation once the petition has been signed. Alternatively, a petition may help facilitate subsequent communications that could lead to recurring donor engagement in the future.

So, petitions can be very useful ways to raise awareness and funds. But how do you set about starting one? Just as in business, where Process Bliss business processes can deliver results, petitions should follow certain clear steps.

You need to settle on a specific goal that’s realistic. Your general cause might be road safety, for instance. However, your petition’s goal should probably be more focused, e.g. reducing speed limits around schools.

Your cause can be controversial, too. Not everyone’s going to agree with you. Sometimes it’s the contentious causes that attract the most vigorous support (and opposition, of course). Animal welfare, for instance, can elicit extreme levels of feelings in favor and against.

The most important thing at this stage is to be sure to research the area thoroughly. Make efforts to grasp the intricacies of what you’re campaigning for, so that you can deal with any arguments that might be presented against your stance.

Also, be sure you know who the relevant decision makers are. These are the entities that your petition needs to target, so you’ll send it to them once the petition campaign is complete.

Once you have your cause and goal clear in your mind, you need to think about who your natural supporters might be. For instance, if we take the school speed limit example again, you’ll likely get the most support from parents of young children.

When you start to get an idea of who you’ll be talking to primarily, you can work on the next steps.

Is your petition going to be online or on paper?

If you’ve decided that your supporters are more likely to be predominantly at the older end of the age spectrum, you may want to consider using paper and distributing it via libraries, coffee houses, and community project centers. If on the other hand, you think your campaign will appeal more to younger people, then a digital petition spread via social media might be a better bet.

Each medium has its own advantages. A paper-based petition’s great for catching people while out on the street – they’re easy to complete and don’t require any fiddly tech. You may also be able to use a third party to distribute copies of your petition, in which case you can utilize an exclusive distributor agreement free template to make things even simpler.

Online petitions are super convenient for those more accustomed to digital interaction in general. An electronic petition also offers the advantage of auto-fill, which is a great time saver if the supporter is using their own device to sign it.

Or, you might decide to do as a lot of charities do and use a combination of both. This can really optimize your reach.

When you know your audience, you’ll know the kind of wording and cues they will respond to in a petition. Do you want it to be sober and informative, or eye-catching and punchy? Again, at the risk of generalizing, senior types may prefer the former, and younger supporters might respond better to a campaign with a bit of extra creativity.

Your campaign might be targeting people who are already specialized in the subject of the campaign, so you might choose to be more technical in your petition’s language. Alternatively, if you’re directing the petition to people who are very busy with little time on their hands – working professionals or young parents, for instance – then you’ll want to make your petition’s text more concise.

Think about your potential supporters as you write, and use a tone that’s likely to chime with them. You might decide to use more emotive calls to action, or it may be better to use calm logic in your attempts to get your reader onside.

If you only remember one thing regarding wording, remember this: positivity pays. Whether you’re selling a point of view or a VoIP connection, people tend to respond more favorably to affirmative language rather than negative and critical sentiments.

Advertising has used this trick for a long time. For example, effective ads praise the virtues of the product rather than dwelling on the downsides of life without them.

The work’s not over yet! Once you’ve finalized the wording of your petition, make sure to take a step back and proofread. Nothing looks more amateur than a careless approach to grammar. No matter how worthy the cause, your petition can lose all potency just because of one silly spelling mistake. Maybe give it to someone else to perform a content audit.

Take some time to make your petition engaging. For instance, think carefully about your headline. You should try to make an impact without being too sensationalist.

Your headline needs to give a clear indication of your position from the outset. People don’t respond well to feelings of being duped.

So, communicate your petition’s goals clearly and engagingly. Then, the chances are, anyone who chooses to read further will already be somewhat inclined to help you. From there, you’ll just need to give your reader a nudge over the line into signing.

If you’ve decided to take your petition online, you’ll need to put a lot of thought into your landing page. Use direct language, strong imagery, and a clear call to action (CTA) to help your petition to reach its potential. Your website’s job is to funnel vague feelings of support into concrete action, just like a sales website. Use the same approach of making the site attractive and simple to navigate.

There are online templates out there for everything. From general website design templates to something as specific as an NDA agreement template, the internet is full of assistive tools to help you construct a given format. By using a template for petition signatures, you’ll save yourself a good deal of time and effort, and you can be sure of a professional result.

You’ll need to think about what you want to include. An option to collect your supporter’s contact details is very useful, especially email addresses. If you get permission to use the supporter’s details in the future, then you can build an impressive support database.

You’ll also need to consider data portability. It’s very helpful to be able to export the names to a spreadsheet for reporting purposes.
Launch It!

Use whatever media that comes to mind to attract publicity to your petition launch. If you’re good with press releases, take a little time to craft one and then try to get local media interested. If you’re more of a social media expert, you can work to expand your petition’s reach and get it seen on every platform.

You might be able to link up with a sponsor, which can help you to extend the reach of the petition even further. If you think you have a potentially interested sponsor, you’ll want to draw up an agreement, so you might decide to utilize a free sponsorship agreement template to help you.

Ultimately, the bigger you can make your petition’s launch, the better.

If you follow these steps, your petition stands every chance of achieving its goals. Whether its ultimate goal is reached depends a little on the responsiveness of the authority you’re addressing.

But by making sure that your petition’s well-written and widely read, you’ll have given yourself the best chance of making a real difference, which is quite something to be able to do.

Yauhen is the Director of Demand Generation at PandaDoc, the best online signature service. He’s been a marketer for 10+ years, and for the last five years, he’s been entirely focused on the electronic signature, proposal, and document management markets. Yauhen has experience speaking at niche conferences where he enjoys sharing his expertise with other curious marketers. And in his spare time, he is an avid fisherman and takes nearly 20 fishing trips every year. 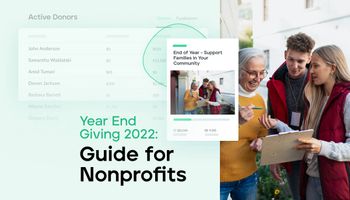 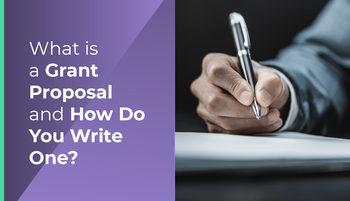 What is a Grant Proposal and How Do You Write One?